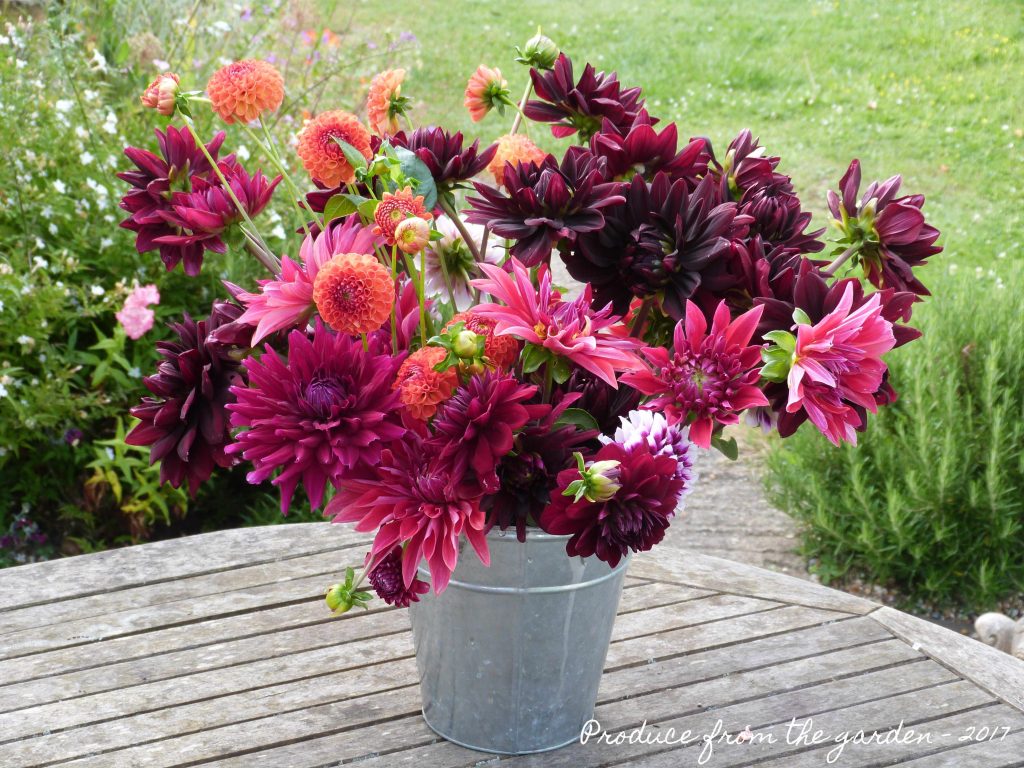 Regulars to my blog will know of my passion for Dahlias. They’re amazing flowers that never fail to put a smile on my face. They come in a vast range of colours and shades, but, never blue and quite rightly so, a blue Dahlia is just wrong! Their shapes and sizes are also wonderfully varied, never allowing you to bore of their splendour. If I was a mathematician I would wax lyrical about their geometric patterns and Fibonacci numbers, but I’m not, I just love how some are pom poms, some open flowered, others water lily shaped and the show stoppers are the size of dinner plates! Once they start flowering in late June/July they don’t stop until the first frosts, they’re the best cut flower you can grow and my home never looks better when filled with their blooms. If I was to be hyper critical and in the pursuit of a balanced argument, they are lacking in scent, but it would only lead to a sensory over load whilst taking in their magnificent appearance, so a lack of scent is a good thing!

The Dahlia bed in full bloom

How to grow Dahlias:

Now is the time of year to go Dahlia shopping. Buying a Dahlia tuber is the best garden investment you’ll ever make! Your local garden centre will no doubt have a selection, but for a fully satisfying dahlia retail experience I would recommend:

http://www.peternyssen.com/  – A very dangerous web site, their bulbs are amazing and I just can’t stop myself, I worry every spring that the husband will notice the number of new bulbs I’ve invested in! 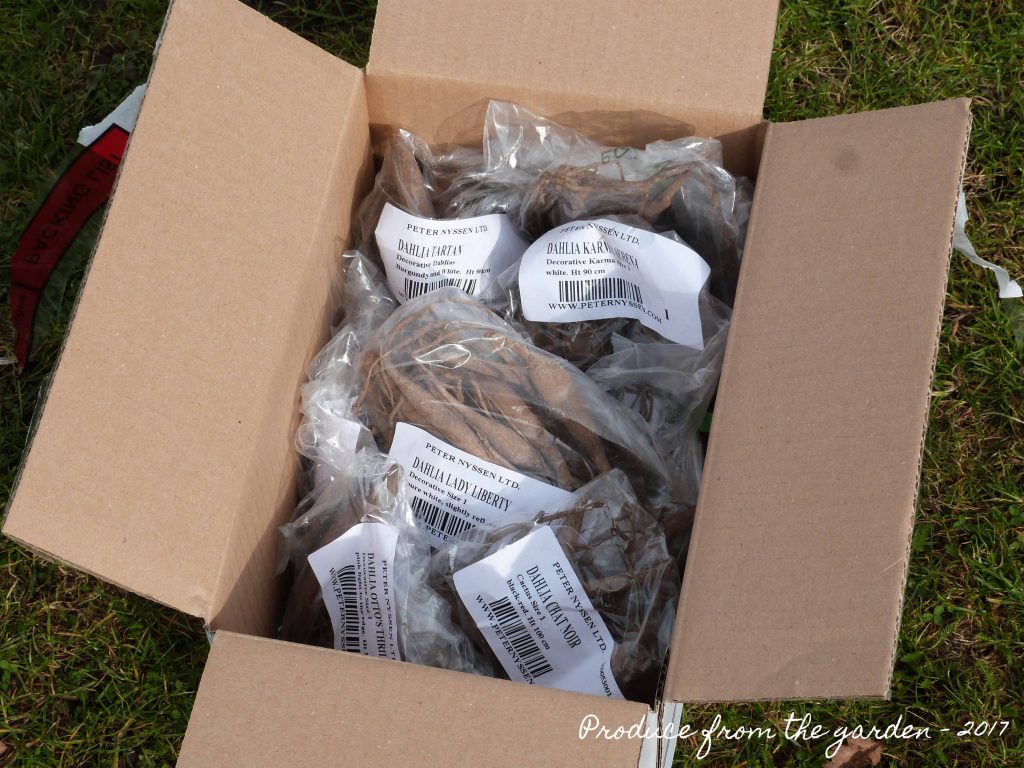 http://nationaldahliacollection.co.uk/ – another great dahlia shopping site, they’re based in Cornwall near Penzance, you can visit their amazing dahlia fields in the summer, well worth a trip if you’re on your holidays in that neck of the woods.

Plant up the tubers in approx. 10inch x 10inch pots (enough room for the dahlia to comfortably sit), water and keep them in a green house, conservatory etc. They’ll start to shoot, feed them every few weeks and keep watered. Don’t plant them out until the end of May when there’s no chance of frost, you’ll have nearly a foot of growth, and they be strong healthy plants that will be sufficiently mature to withstand a slug and snail attack. Dahlias are quite greedy plants, they like to be planted in ground that has been enriched with manure/ chicken poo pellets, in fact any fertiliser. 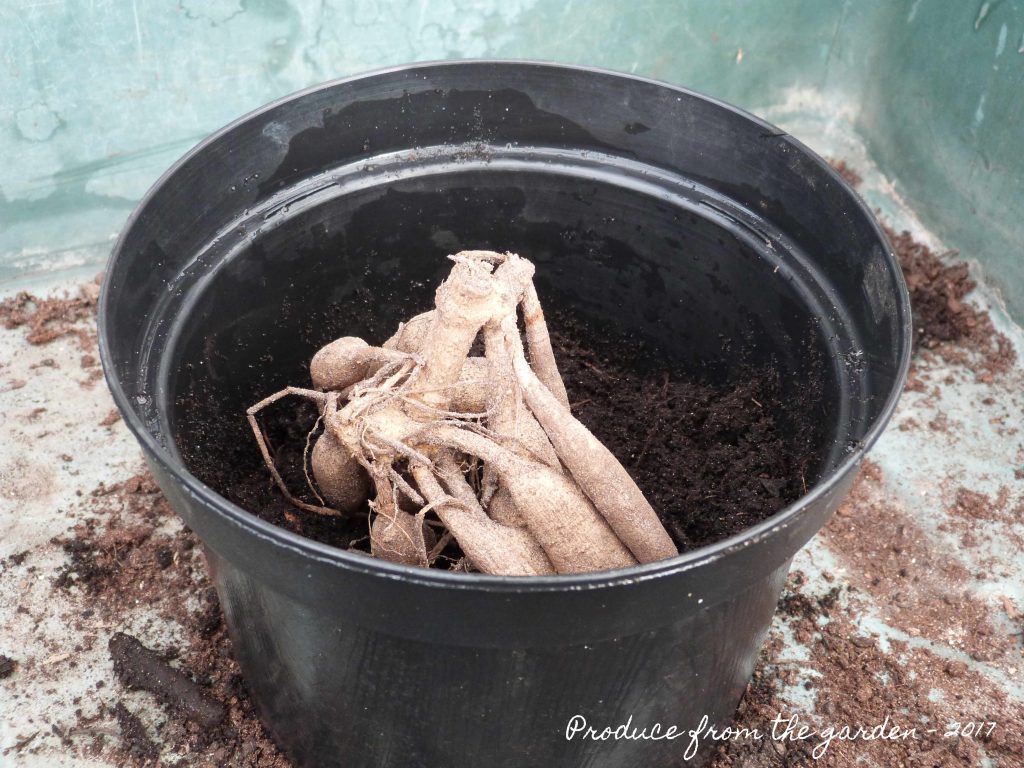 Place the tuber on a bed on compost in the pot 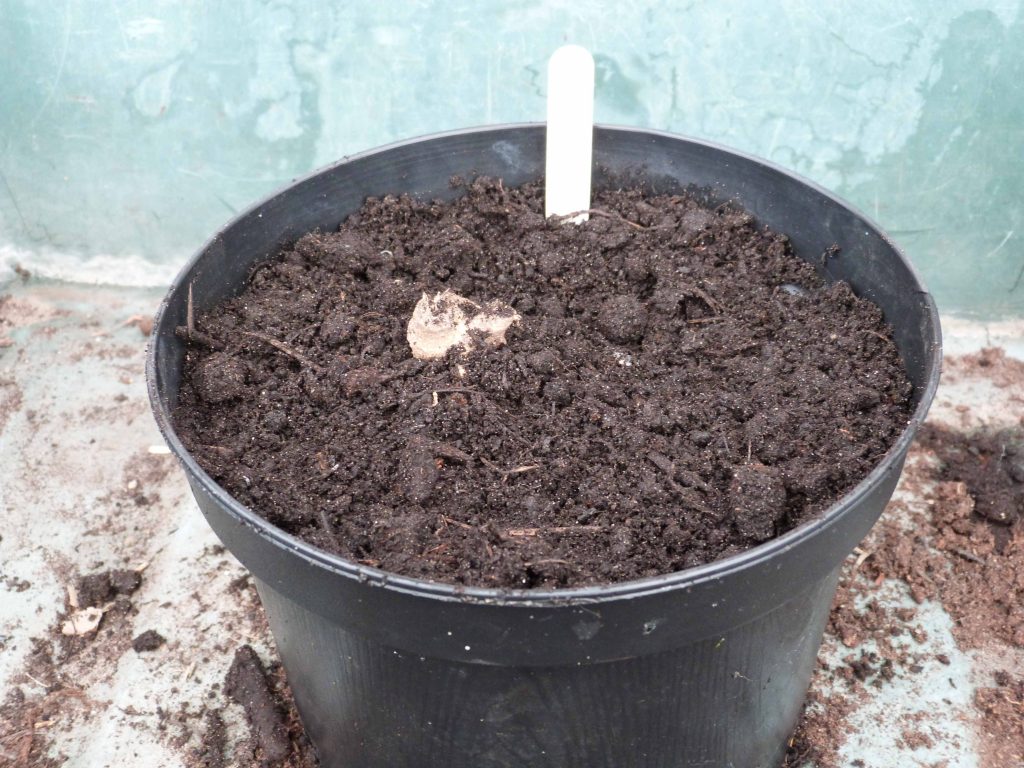 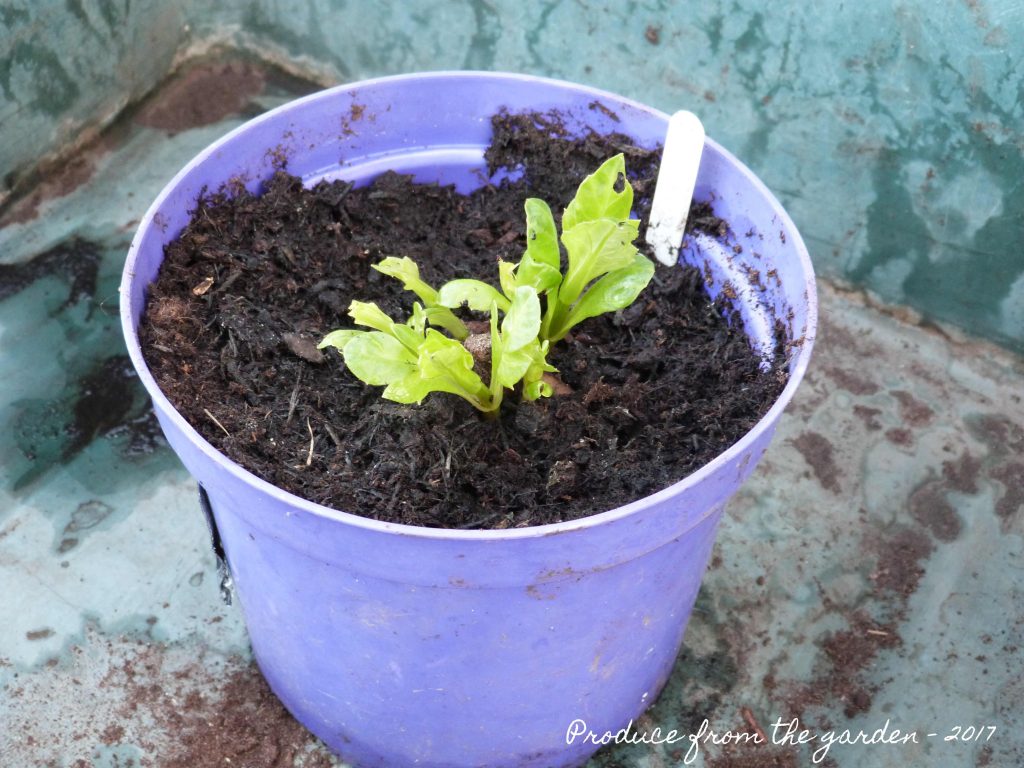 New dahlia shoots, if you have more than five, you can take cuttings from them with a sharp knife

Once planted you’ll need to stake them, many dahlias can hit a meter or more in height and width. A strong breeze will snap the stems destroying a dahlia plant in its prime.

Either cut the flowers for the home or let them put on a show in your border. If you’re not treating them as a cut flower it’s important to snip off the spent buds after flowering, dahlias are a cut and come again crop, that will stop flowering if they think they’ve gone to seed. Clip the for the pointy Spent buds, the dome shape buds are about to flower.

Dahlias in my home: 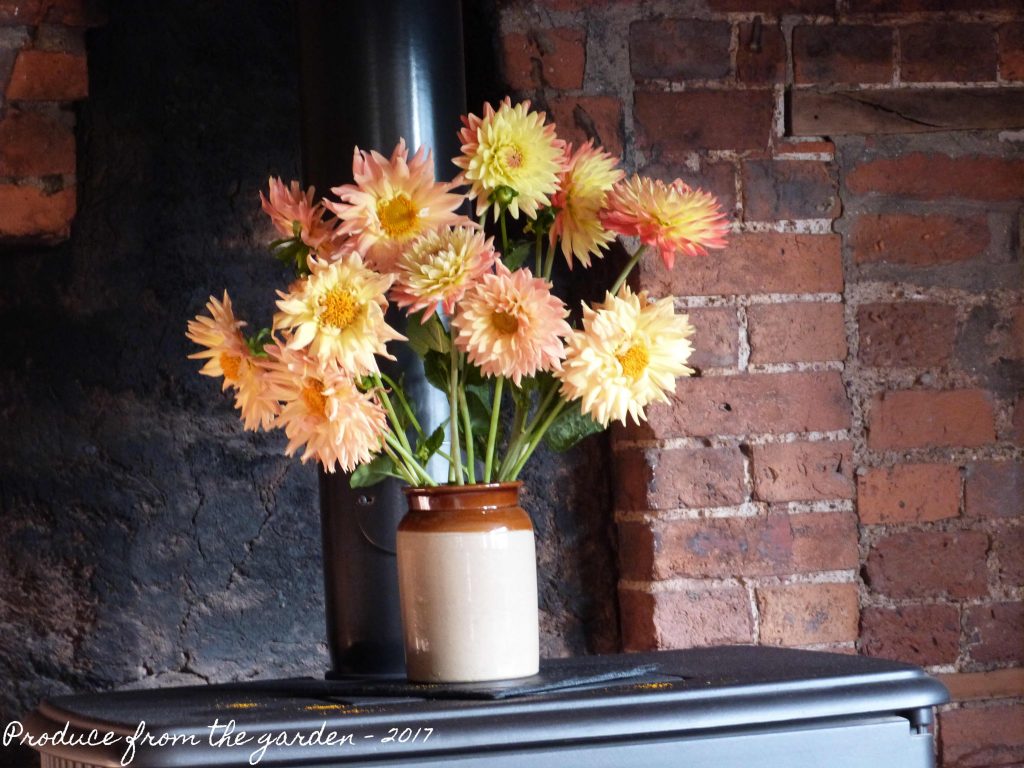 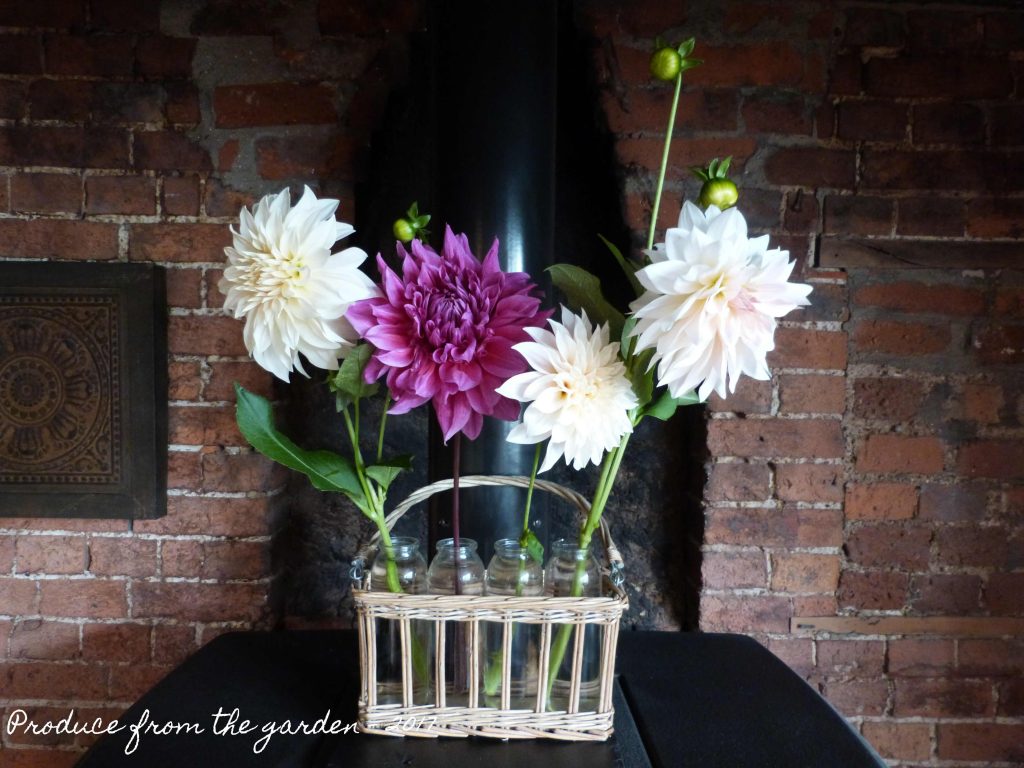 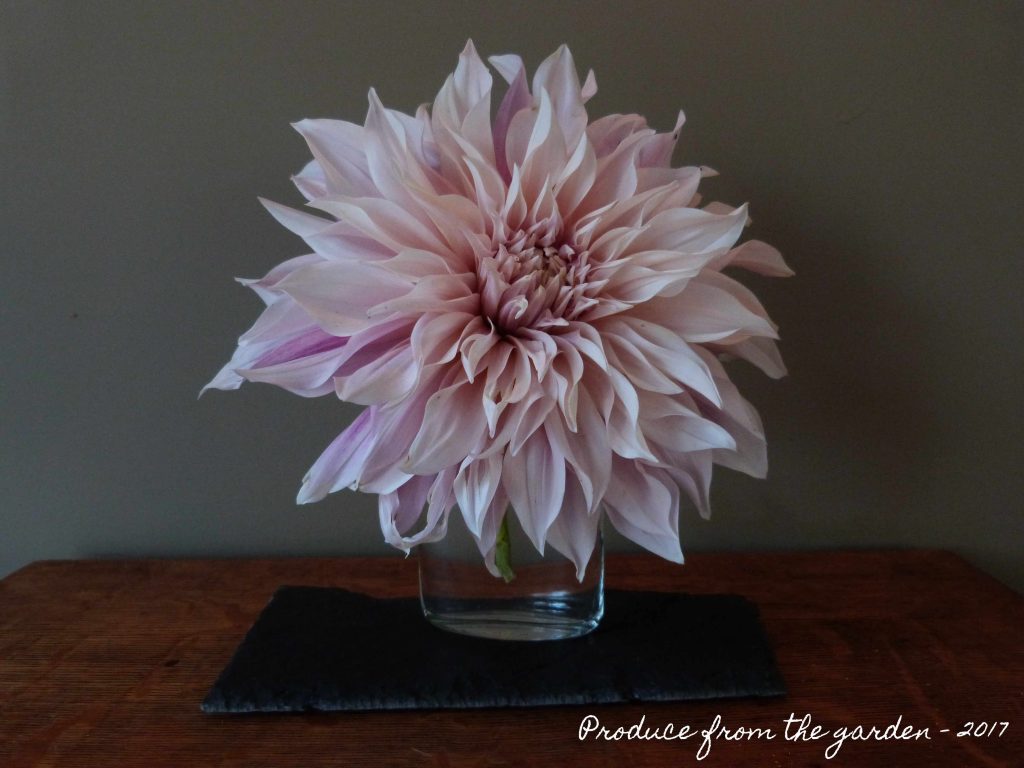 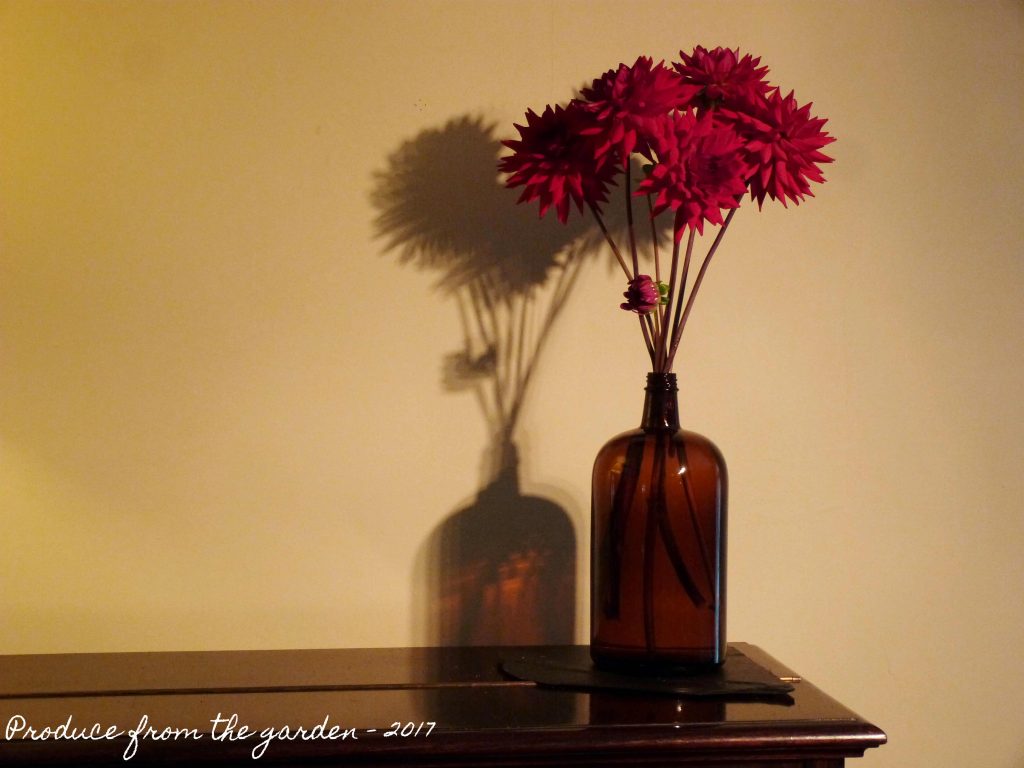 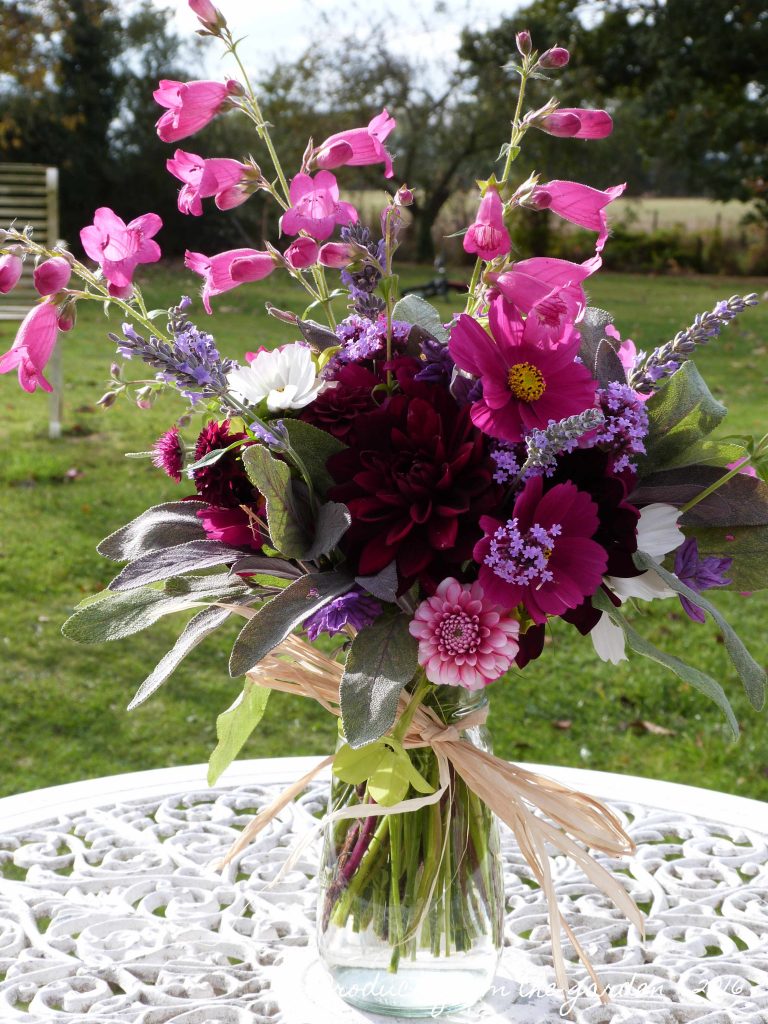 After the first frost the dahlia foliage will go black. You need to decide if you’re going to dig up your tubers or leave them in them planted over winter. Being a fan of low maintenance gardening techniques I leave mine in. I cut back the black foliage leaving a foot of stem (it’s a marker so you know where to look for new growth next year), I then mound up with 12 inches (30cm) of insulating mulch (wood chip, manure etc.), I’ve managed to successfully get dahlia through winters hitting -10°C. In spring, knock back the mulch ready for shoots to break through, do bear in mind this will be latter than the one brought on in the green house.

If you’re far more organised than me, want to ensure the survival of your dahlias over winter and bring on an earlier flower crop (June instead of July) dig up the tuber, (don’t store them in a tray like the books say, you’ll lose loads to rot), pop them in a pot with compost. Very lightly water and then just leave in the greenhouse over winter, when they start to shoot in Spring just follow the same steps as when you plant a new tuber.

You can never have too many dahlia plants! So, if you’re new to growing dahlias you’ll soon want to know how to multiply your stock.

When you’re growing dahlia tubers in pots you only really want five or six main stems, the others can be cut off, taking a little snag of tuber, pop into compost and grow on in the greenhouse, soon you’ll have a new plant. Just one tip, if the stem is older and hollow the cutting won’t take, it must be solid. Once the cutting starts growing and has a good root system, pot it on. It might not flower this year and it will benefit from staying in a pot and not plant out, a tuber will form over summer take the pot back into the green house for winter and then plant out the following year. 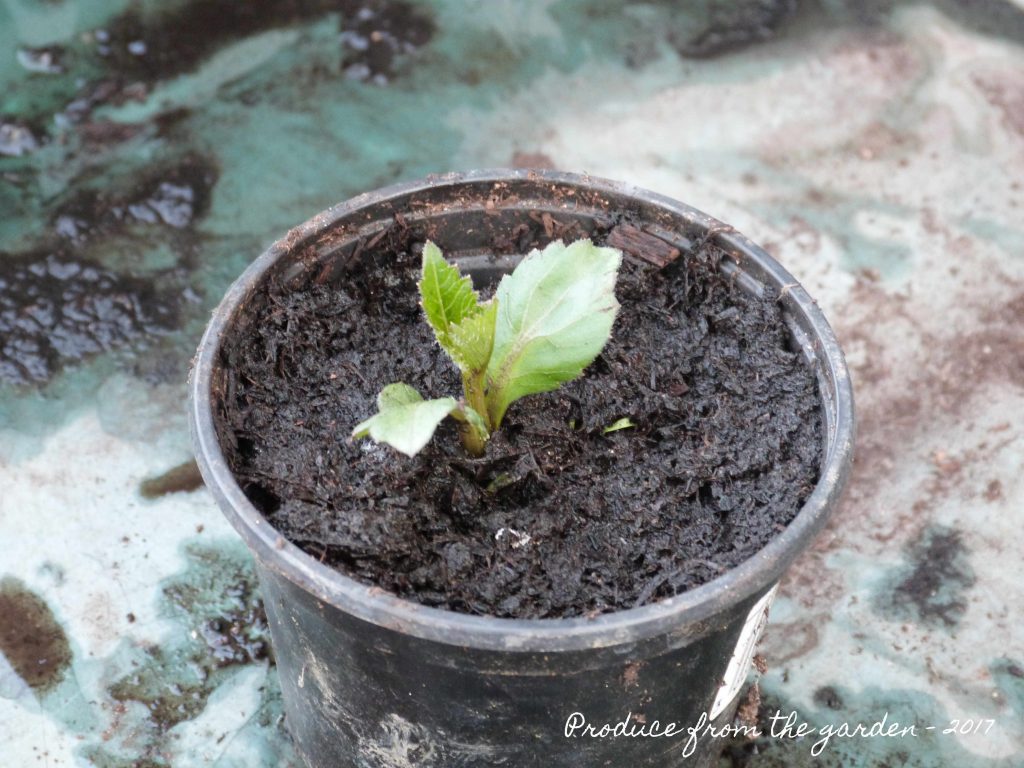 This is the first year I’ve sown dahlia seeds, previously I’ve not gone down this route as I usually can’t stand the faddy duddy colours that the dahlia seeds often come in. However, I saw a cheap out of date packet of mixed colour pom poms and I couldn’t resist. Once sown I popped the seeds in my propagator and they germinated within four days. I’ll report back on their success, I’m keeping my fingers crossed for pinks and whites, I won’t be doing it again if I end up with yellows and peach flowers! 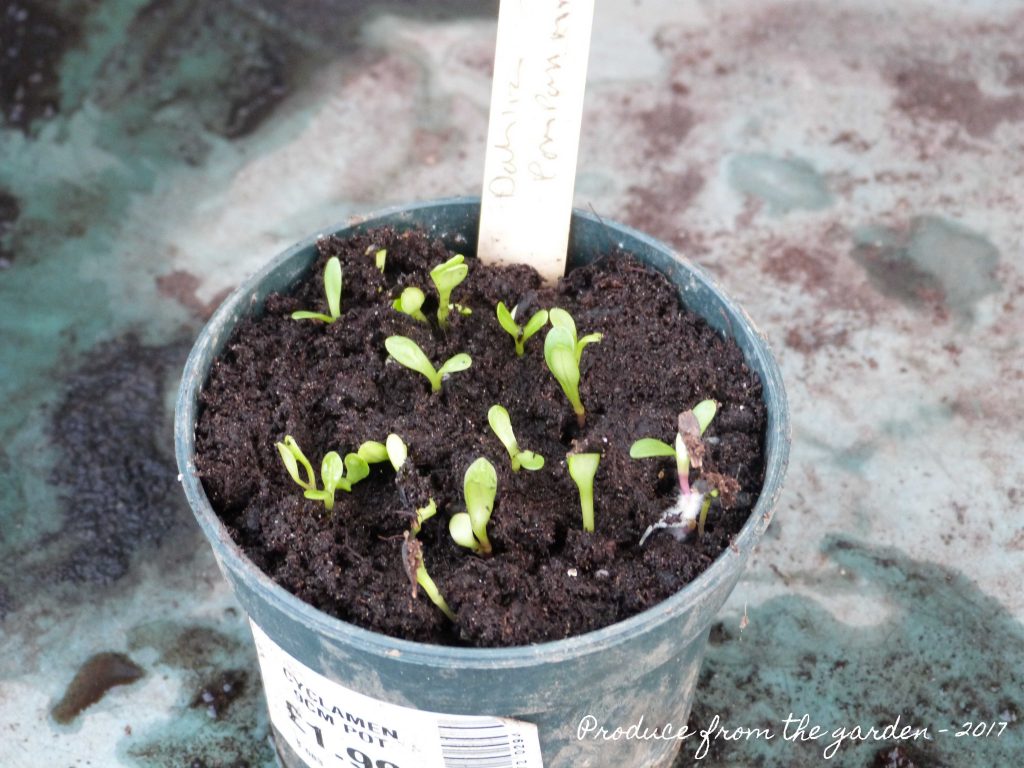 Dahlia seedlings, they will need potting on in a few days.

After a few years, the dahlia tubers do get to an enormous size and do benefit from being dug up at the end of the season and divided up, then following the overwintering in a greenhouse method. This is an easy way to bulk up your dahlia stock.

If I’ve not convinced you yet to grow dahlias, take a look through these beauties: 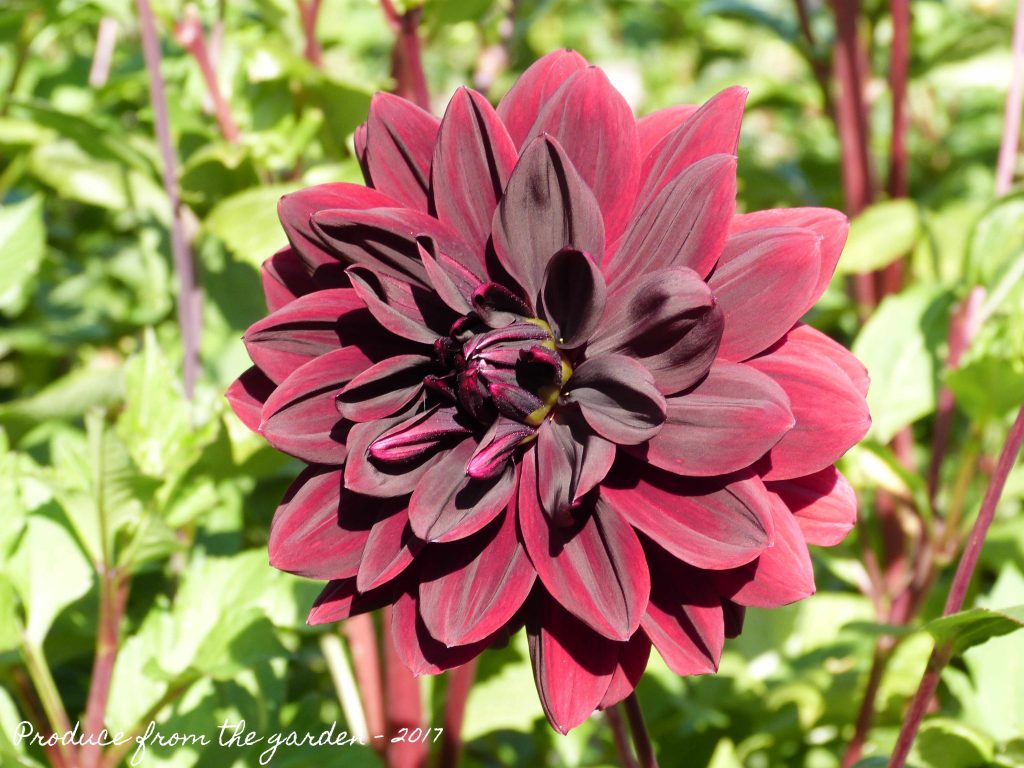 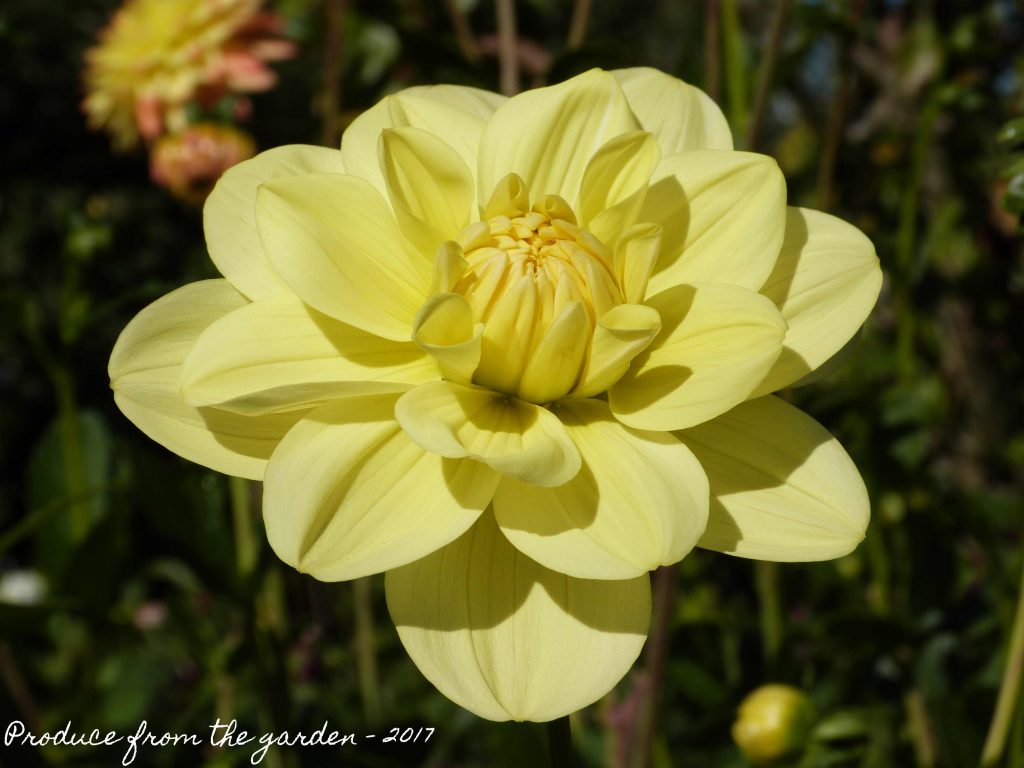 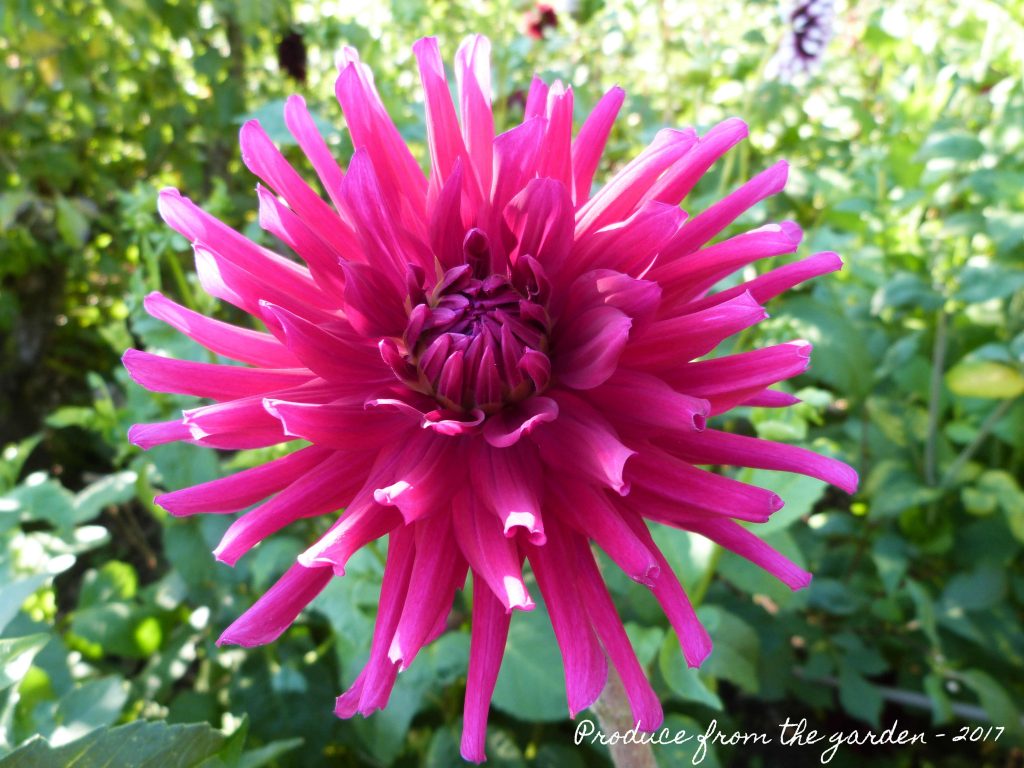 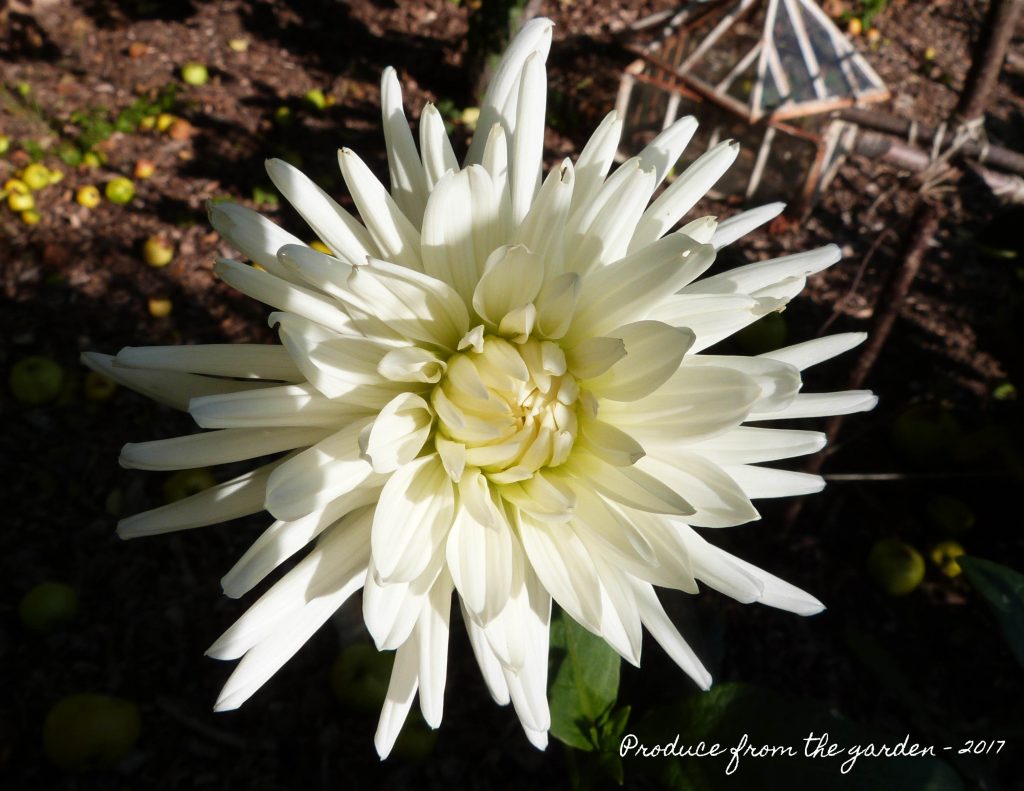 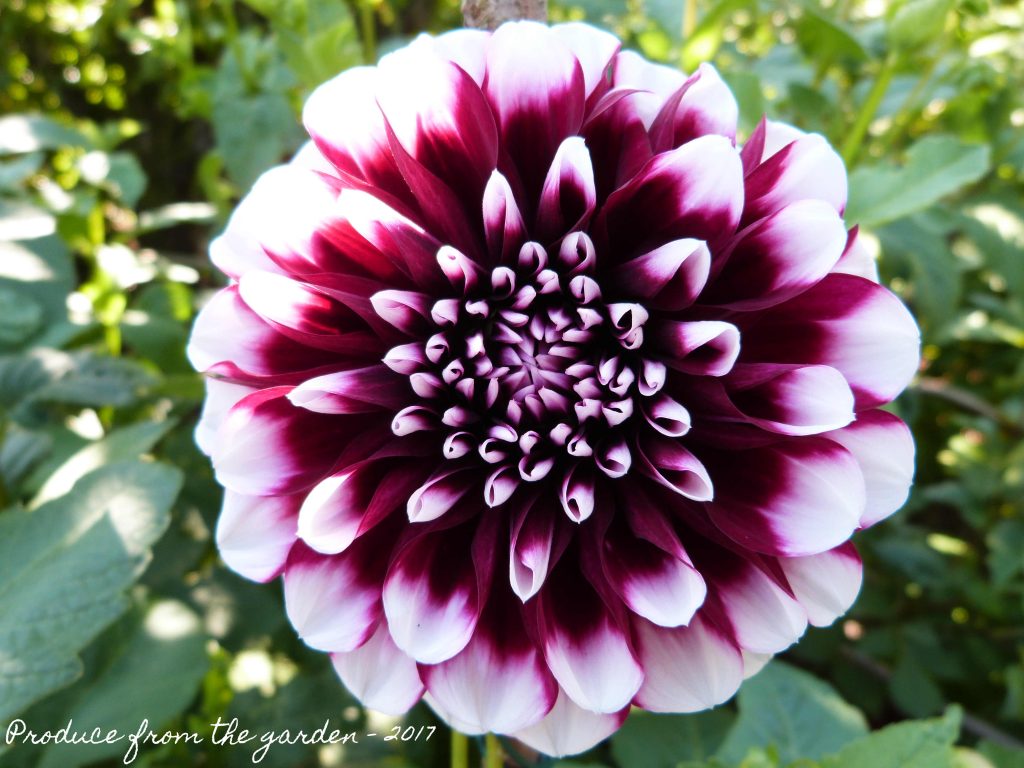 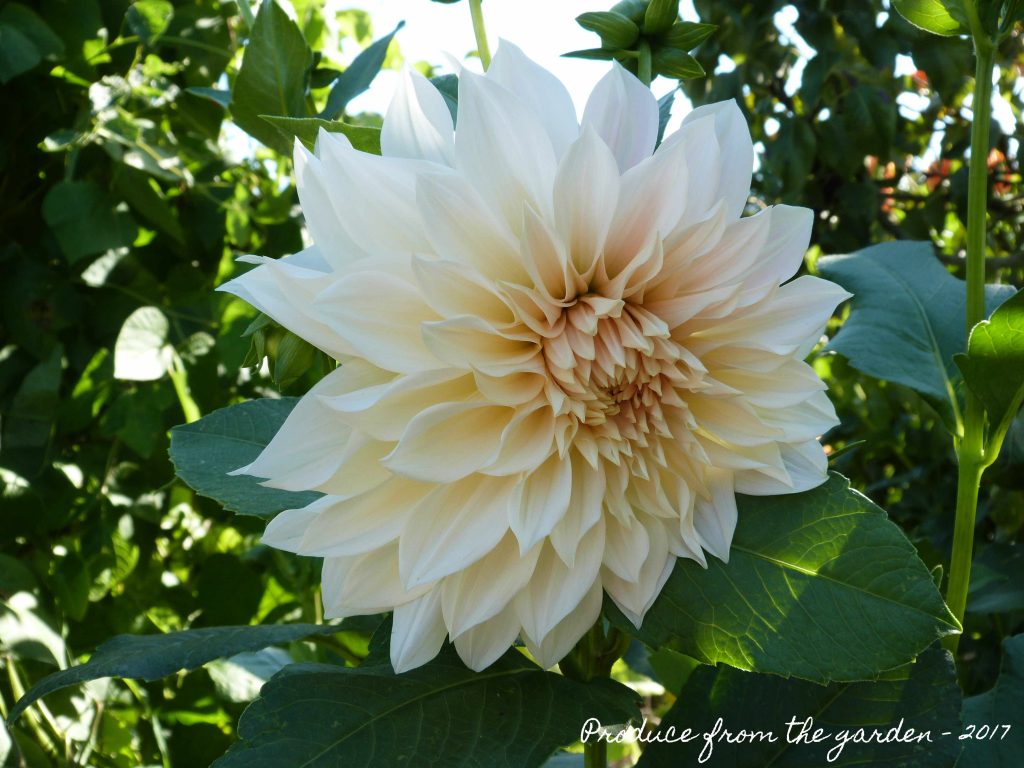 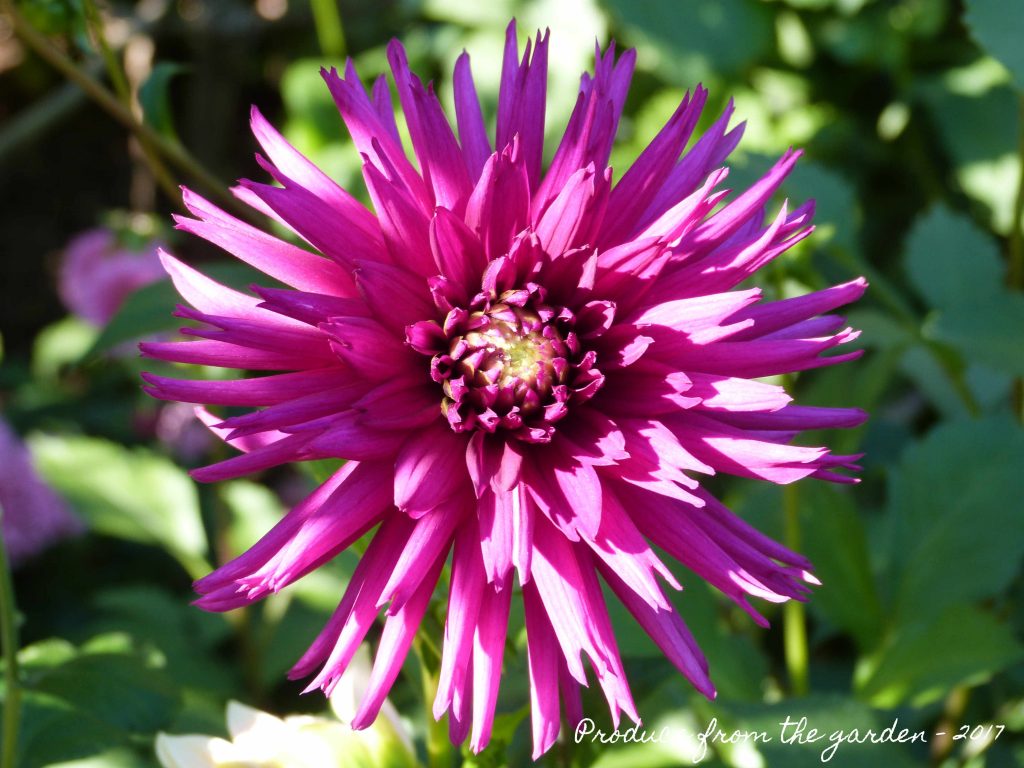 I hope I’ve inspired you to go dahlia shopping, it’s well worth it, they’re my number one flower and it’s incredibly easy to catch the slightly obsessive Dahlia bug!

2 Replies to “All you need to know: Dahlias”