We’ve fifteen apple trees and one pear tree in our garden, I’ve always felt guilty that we’ve not made the most of the fruit. We don’t buy dessert apples in September and October, a few apple pies are made, but, the majority fall to the ground waiting to be picked up and put on the compost heap. Past attempts to store apples have always attracted mice or rats, resulting again in the whole lot going on the compost heap.

So this year I treated my husband who has a September birthday to an apple press and crusher, with the idea that we’d make lots of juice and cider from our apple harvest. So yesterday we spent a productive day, picking, juicing and bottling our apple crop.

To my amazement the whole family joined in! We had a great day crammed into our boot room (three boys, two dogs, my husband,myself, the dog beds, laundry and apple pressing paraphernalia. No doubt those of a hygienic disposition will stop reading at this stage), everyone taking on a role in the production process, and sticking with it! 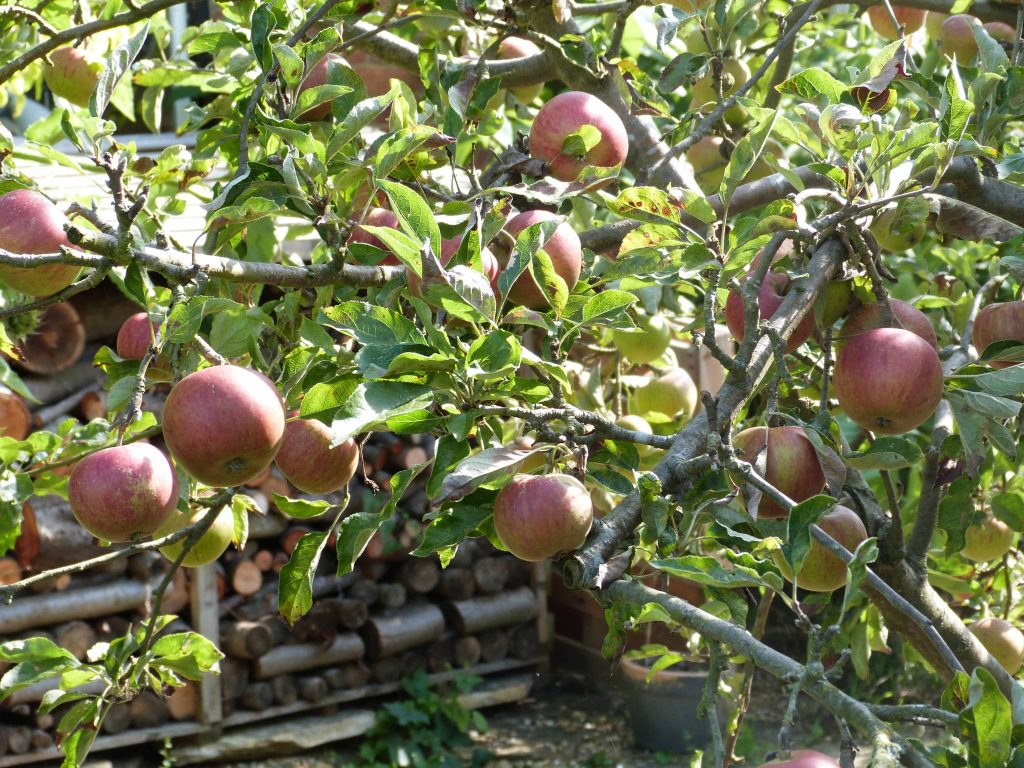 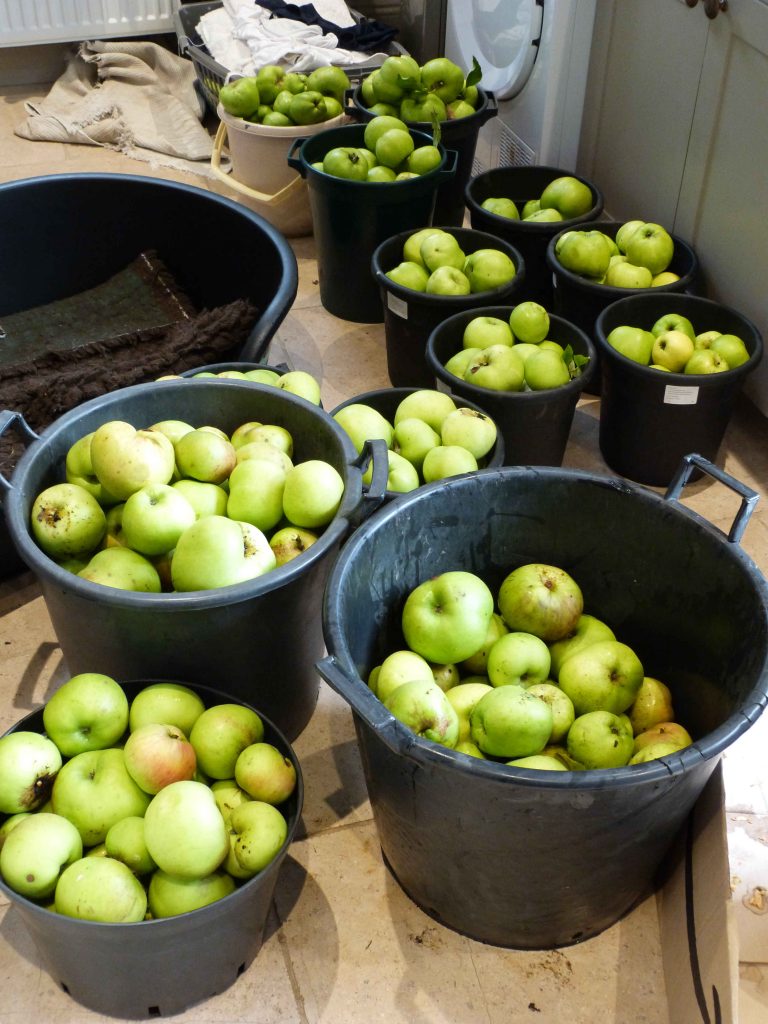 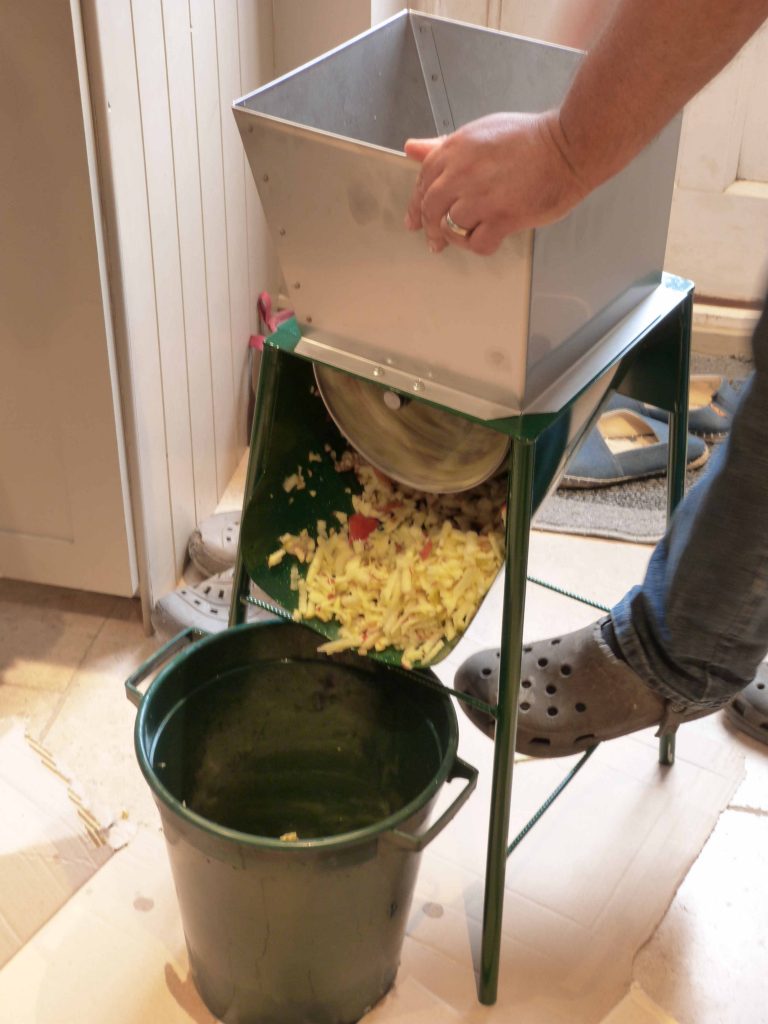 The apple crusher. Apples were cut in half and put in the top where they were the were grated ready for juicing.

The crushed apples were then put into the nylon bag in the apple press, the wood chocks inserted and the press screwed down… 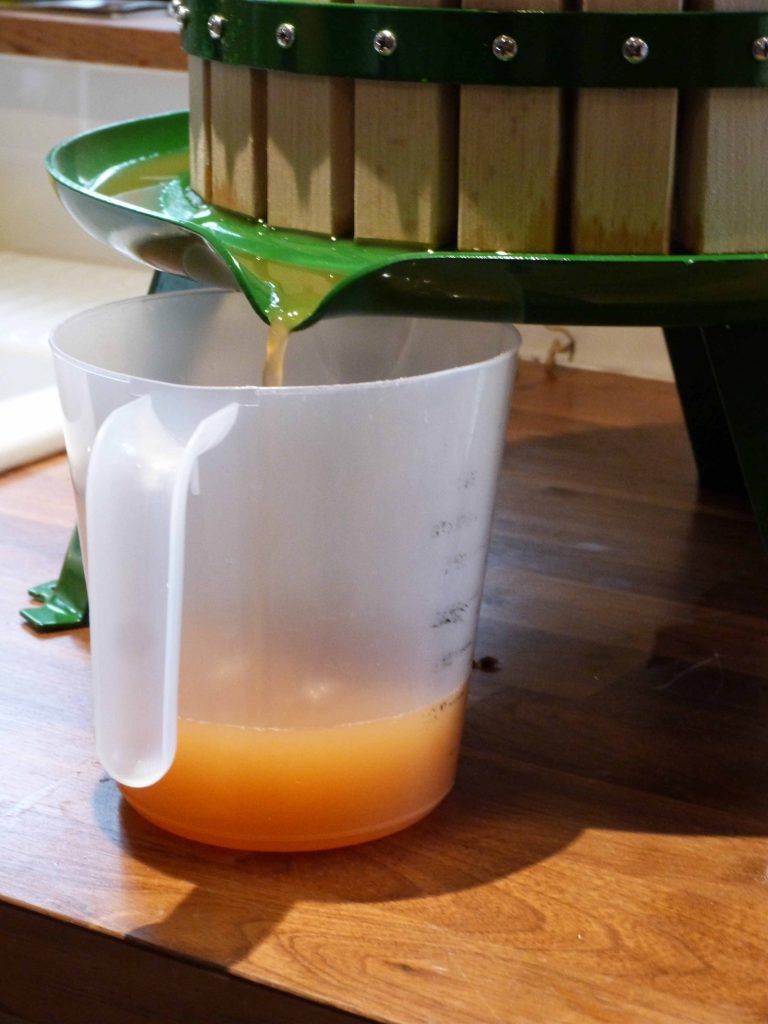 …and the juice flowed

Once juiced it will keep in the fridge for a couple of days. We had 36 litres of the stuff so we decided to pasteurise and bottle the dessert apple juice and some of the bramley apple juice. The rest of the cooking apple juice was to become cider.

How to pasteurise your apple juice

To pasteurise you add 5 grams of ascorbic acid (vitamin C) to 10 litres of juice and then put in glass bottles. The bottles (uncapped) are placed in a large sauce pan of simmering water. A digital thermometer is placed into the bottle and when the juice reaches 75 degrees C remove the bottles and place the caps on tightly. This method should ensure the juice has a two year shelf life. 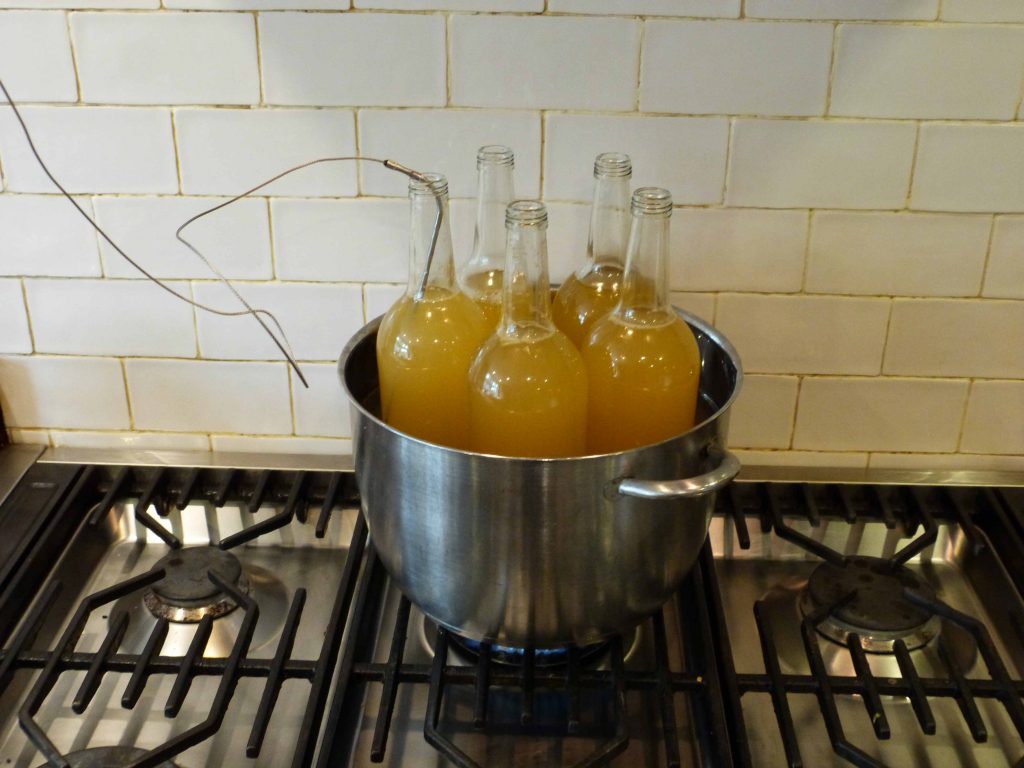 Pasteurising the juice, the wire coming out of the bottle joins the digital thermometer 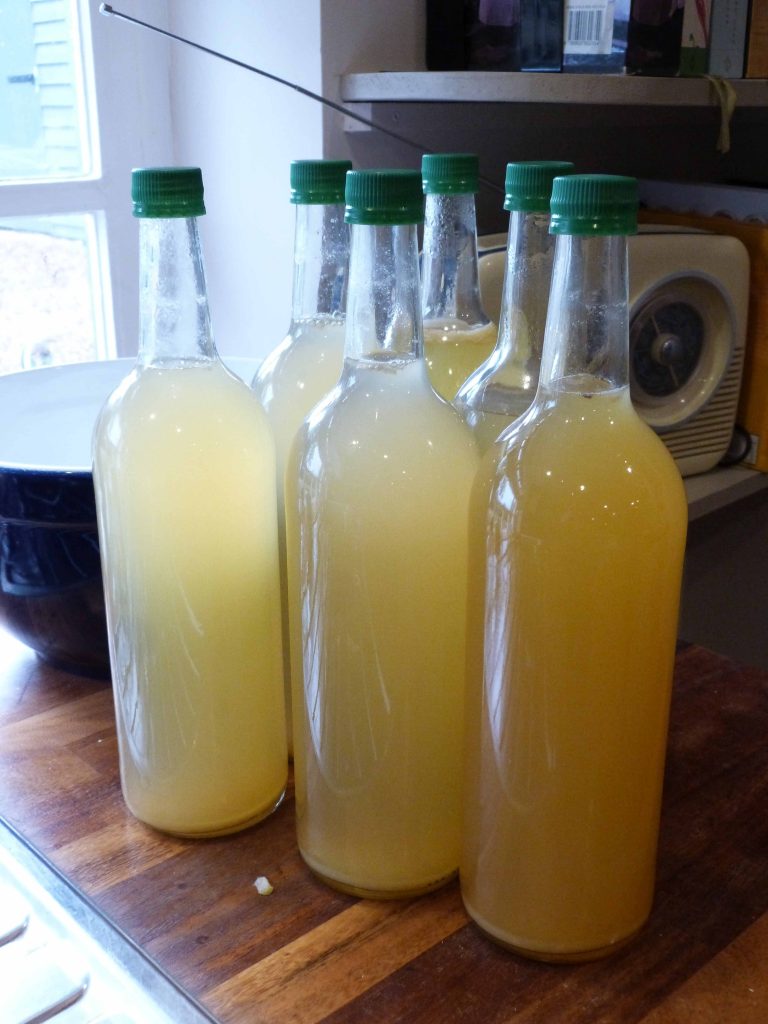 How we made our cider

The majority of our cooking apple juice was placed in a fermenter for cider. A packet of cider yeast was added and this will be left for a couple of weeks until fermentation is finished, my husband tests for this with a hydrometer. The juice is then transferred to another container where campden tablets are added to sterilize. The cider is then transferred to bottles and will be ready for drinking in 6 months. 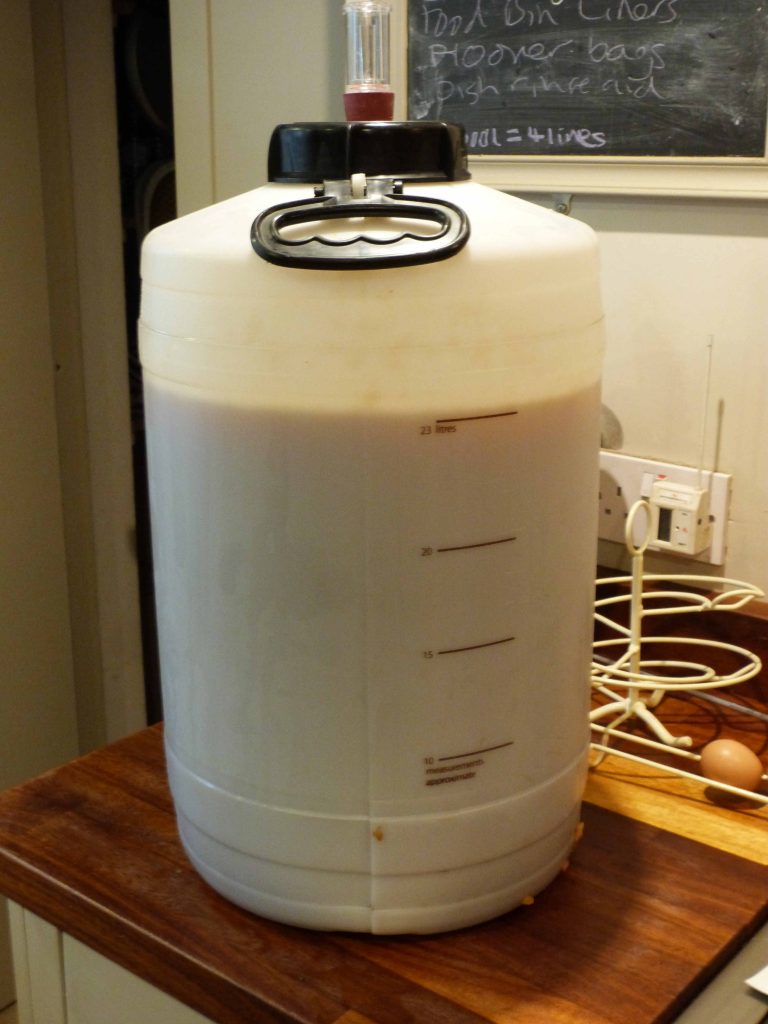 The apple juice in the fermentor, destined for cider

All in all a very productive day, the boys loved crushing the apples, the husband has a ridiculous amount of cider to look forward to next spring and I have fewer apples to pick up and compost this year and that warm satisfying feeling that I’m making the most of what my garden has to offer.