Kent is a desert. I’ve heard several gardeners describe the ‘Garden of England’ that way. Maybe a little excessive, but we do suffer in summer from lack of rainfall. Last year whilst renovating our home I did grow a few essential veg, they were a dehydrated disaster. I had no time to water on a regular basis, and to be honest still don’t. Raised beds are going to dry out quicker than those at ground level, which also adds to this watering issue. I garden on heavy clay soil; during dry spells the soil becomes solid and as hard as a brick. Adding garden compost, leaf mould and mulching all helps but water is the key to successful vegetables and cut flowers.

Now, my lovely friends who live round the corner had beans, courgettes and cucumbers. coming out of their ears last summer. They had a watering system. Whilst they were on holiday I was given permission to be in charge of this horticultural miracle. I have decided that it’s the most sensible way forward to ensure bountiful produce from our kitchen garden this year. 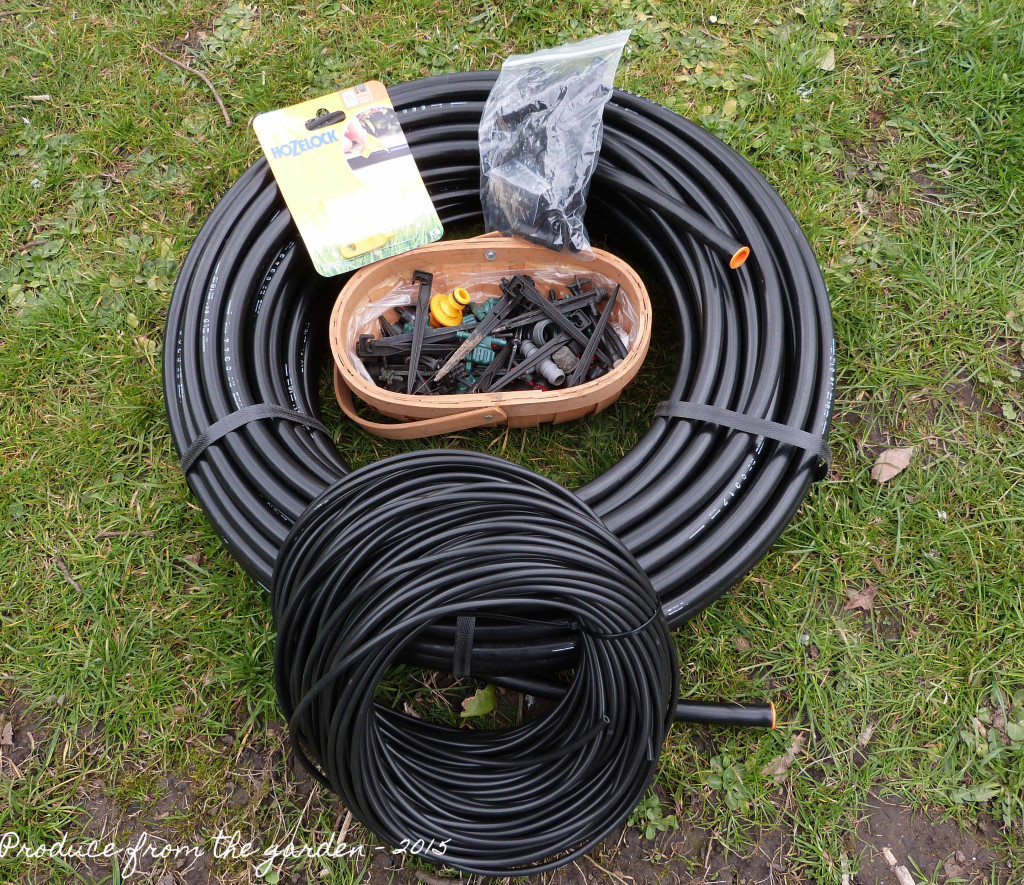 I have set up micro flow dripper heads in the greenhouse; this is basically a mini fountain with 6 trickles of water from each head. So far so good, they’re keeping the tomatoes, tomatillos, cucumbers and basil well watered. They’re growing at the rate of knots. So are the weeds! The hoe has to come out once a week to keep them down. 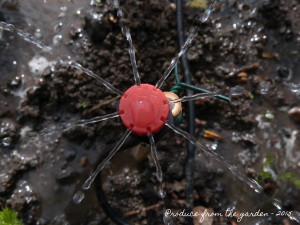 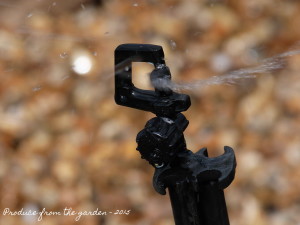 On the veg beds I’ve gone for mini 360 degree sprinklers. These work well soaking all the soil, which helps the sown seeds to emerge. They are also good for watering the ‘multi plant’ crops such as broad beans, dwarf beans, onions and salad crops. I will use the same drippers as the green house for the larger plants such as courgettes, squashes and climbing beans. With these drippers you have more control over where the water goes, in theory saving water by just targeting the base of the plants. I am also going to use these dripper heads in the cutting border, directing the water to the bases of the cut flower plants.

In the last few weeks we’ve had minimal rain and the watering system has worked a treat. As the year progresses I’ll report back on how it’s really worked and what tweaks will be required for next year.